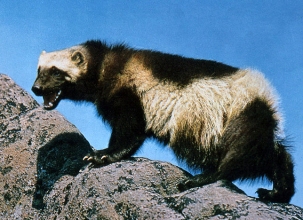 Not this one. (photo from the National Park Service, accessed from WikiCommons)

This one!
(photo by Alison Wagner)

An episode of the TV series The Big Bang Theory featured its lovable group of “nerds” debating who was the bravest character in the Marvel Universe. The know-it-all Sheldon proposed that whoever had to give Wolverine a prostate exam was, indeed, the winner of that dubiously enviable title. Sheldon’s wrong on this one, though, and comic book urologists can relax – Wolverine won’t need the prostate exam.

Advances in immuno-oncology deal mostly in the adaptive immune system (T and B cells); however, the innate immune system plays an even more active role in tumor development. For decades, tumors have been described as “wounds that do not heal.”** Under normal circumstances, the presence of a wound activates the innate immune system, causing leukocytes such as macrophages to quickly migrate to the site of the wound and begin their work of healing. The healing process requires activation of these cells, initiating reparative processes including inflammation and angiogenesis – two key processes also seen in tumor microenvironments. The key difference between wound healing and cancer is that in time, wounds heal and activation and inflammation are resolved, allowing the immune cells to disperse away from the site, and everything returns to normal.

Cancer does not resolve. In cancer, the immune cells do not disperse. In fact, after the initial migration to the tumor cells, they are overwhelmed by inhibitory signals from the tumor cells that alter the the immune cells’ activation state. This reduces cell killing and instead tricks the immune cells into providing pro-growth cytokines*** that actually help the cancer cells proliferate, create new blood vessels, and invade new tissue. These immune cells not only do not destroy the tumor cells – they actively contribute to the microenvironment that helps to sustain and grow tumors. If the immune system is  the military of the body, the troops go in to do their job against the enemy (the cancer), but are then brainwashed and forced into supportive roles by that same enemy.

This would never happen to Wolverine. With his supercharged immune system, cancer cells would be obliterated immediately and efficiently, the tumor’s inhibitor signals unheeded. His mutant power would protect him from the immune dysfunctions that we mere humans suffer in our fight against cancer. However, we’re catching up. The immune system remains somewhat of a mystery, our knowledge of it lagging behind that of other biological systems. But promising advances such as those in immunotherapy are revealing more and more how we might manipulate it to maybe, possibly, be just a little more like Wolverine.

Now, who wants to work on the adamantium claws?